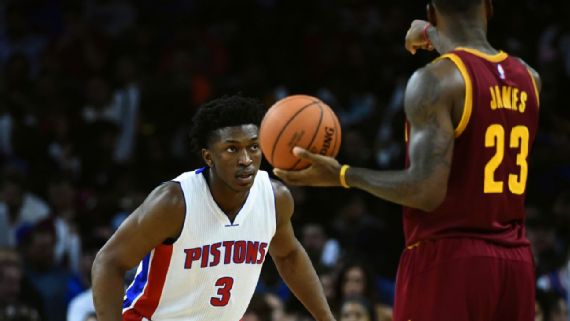 Go ahead LeBron fans, declare us swept if you wish. The Detroit Pistons are just getting started and I’m going with my home team to the fullest degree. WE CAN BEAT LEBRON! We can beat the Cavaliers. I’ll provide you with reasons why and how this dismantling can go. We all know your team is expected to make it to the NBA Finals all shiny and untouched but I think this will be the series that will be the toughest for them as far as physicality and strategy is concerned. Let’s begin, shall we?

Stanley Johnson. Yes. It seems as if I’m just an echo, but proof of my confidence is with those who have personally heard me say that Stanley Johnson is the future, he is our Kawhi Leonard, he is the missing link in our equation to being a consistent title contender, and he is the way we can beat LeBron and the Cavaliers. I’ve been reading across the internet, articles that point out Stanley playing LeBron before he even made it to the league. I’ve seen the praise of Stanley from when he played against LeBron during this season and also seen that he holds LeBron under 40% shooting (I think it said about 39%) in comparison to his 52% clip. I’ve seen all of that stuff over the last few days but this wasn’t a bandwagon situation. I was sold since draft day after I became upset we didn’t go with Winslow. My wise friends then told me that Stanley was the way to go and of course YouTube became the source of proof as to why. So after watching highlights and hearing how confident he is, seeing him embrace the city a little bit thereafter, I grew to believe this kid will be the diamond in the rough that we’ve all been waiting for. He’s already guarded LeBron in game 1 and put all eyes watching on notice. In a very short amount of time. I’ll let his play speak for itself. I’m very confident in his defensive abilities and I’m confident in the growth that Detroit fans and the Pistons team will see from him this summer and going down the road.

Marcus Morris. Yes, he flamed out in the second half against the Cavs. I won’t bet on that trend continuing where he only shows up for 24 minutes. I also notice everyone doesn’t expect us to shoot 57% from 3 again as we did in the first half of game 1. I also don’t expect Kevin Love and Kyrie Irving to combine for 59 points again either, nor do I expect Stan Van Gundy to allow Kevin Love to quietly but obviously play at the 5 position without that being immediately addressed. I respect his decision to not break course cause another team made an adjustment. You don’t fix something that isn’t broken if you don’t know that it’s broken. It ran its course, we lost, fine. Cleveland is “supposed” to hold serve at home anyway, right? Isn’t that how that works? We have weapons that we have yet to unleash and Cleveland hasn’t seen our counter to their little small-ball lineup. Maybe Stan Van Gundy was even more smart to hold serve and not give the rookie Tyronn Lue a look at what would come in game 2. I see a coaching advantage but it’s a two headed monster with LeBron being a coach on the floor.

The Pistons will need better games from everyone involved including Morris, Reggie Jackson with his decision making down the stretch, more assertiveness and defensive tenacity from Kentavious Caldwell-Pope, more offensive intensity from Andre Drummond and much more effectiveness from the bench unit. We have to dispel Cleveland’s big 3. We have sparks on our bench with Johnson, Bullock, Tolliver, and Baynes. Not many coaches have put LeBron out of the playoffs either. Stan Van Gundy is one of those coaches. He is who my trust will be in to see us to beating Cleveland in game 2 and beyond. Don’t sleep Cleveland fans. Yes, LeBron is one of the best in the game if not arguably the best in the game. I respect and love LeBron’s game. I don’t trust his teammates. I see Cleveland as vulnerable as they may ever be this year. They’ve already been tested and only 3 men in their rotation showed up to play in game 1. We’ll see what will happen in this series. I’m biased and I predict Detroit in 7.

One thought on “Detroit VS LeBron (Cleveland Cavs)”